Populists and the 1892 Election in Colorado

Populism! A loaded word in politics to say the least, but at one time the label attached to an entire party in American politics. The Populist Party, more formally known as the People’s Party, was a left-leaning agrarian-based party that emerged in the late 19th century to challenge the two-party dynamic of the Democrats and Republicans in the midst of the gilded age. Emerging from the humble Farmer’s Alliance, at their height in 1892 their Presidential candidate received 8.5% of the popular vote and won 5 states, including Colorado.

For Colorado, 1892 was a rather watershed year. The state had been initially controlled by Republicans since its inception in 1876 (see this excellent article by Matthew Isbell for more), and into 1892 much of Colorado remained so, such as both Senators being Republicans. (Pueblo Daily Chieftain, Page 2) Nevertheless, the Populist Party was determined to change that.

In fact, the national Populist Party didn’t see the Republican Party existing for much longer. “I think the republican party is done for,” L. H. Loucks, President of the national Farmer’s Alliance is reported to have said. (Pueblo Daily Chieftain, Page 1) “Three parties, of course, can not exist for any length of time. The democratic and republican parties are very much alike, with only a difference on the tariff. I think the new alignment of the parties which has been developing for some time past will soon become better defined.” The sentiment that the Republicans and Democrats were too much alike and that voters needed to look beyond the parties was shared by Colorado populists. “When men come think more of the necks inside the party collars they wear than they do of the collars, we will have a large increase in the prosperity of this country,” said a Populist man in Royal Gorge. (Silver Cliff Rustler, Page 1)

To achieve electoral success in Colorado, the Populist Party created what was called a fusion with the Democratic Party in Colorado. Without chances of success on their own, having lost for decades, the Democrats agreed to run on the Populist ticket and caucus with the Populists in the state legislature as anti-Republican votes and not risk splitting the vote and allowing Republicans to win. As the chairman of the Populist Party in Colorado put it: “I favored fusion with the Democrats because that party has more vitality than the Republicans party has; a party that can stand defeat for thirty years and come up smiling every time has plenty of life and will do to tie to.” (West Side Citizen, Page 1) This plan worked, and ended up with events such as a Texas Democratic judge rallying for the Populist cause in Colorado. (Pueblo Daily Chieftain, Page 5)

Tensions ran hot around the election and opinions were widely split on how Weaver and the Populists would do for Colorado. Populists in Boulder County advocated in favor of the Populist cause, pointing out that a Republican legislature just meant more corporations controlling the Colorado legislature and not helping the stonecutters of the county. (Boulder Daily Camera, Page 4) Meanwhile, anonymous readers of the Pueblo Daily Chieftain were much more hard-set against the Populists, saying things such as “A vote for the Weaver electors is a stab at the future prosperity of Colorado.” (Pueblo Daily Chieftain, Page 4)

Ultimately, the Populists in Colorado got their way. James B. Weaver won a blowout victory at the top of the ticket for President, while Populists picked up Colorado’s row offices, most notably in the election of Davis Waite for Governor. 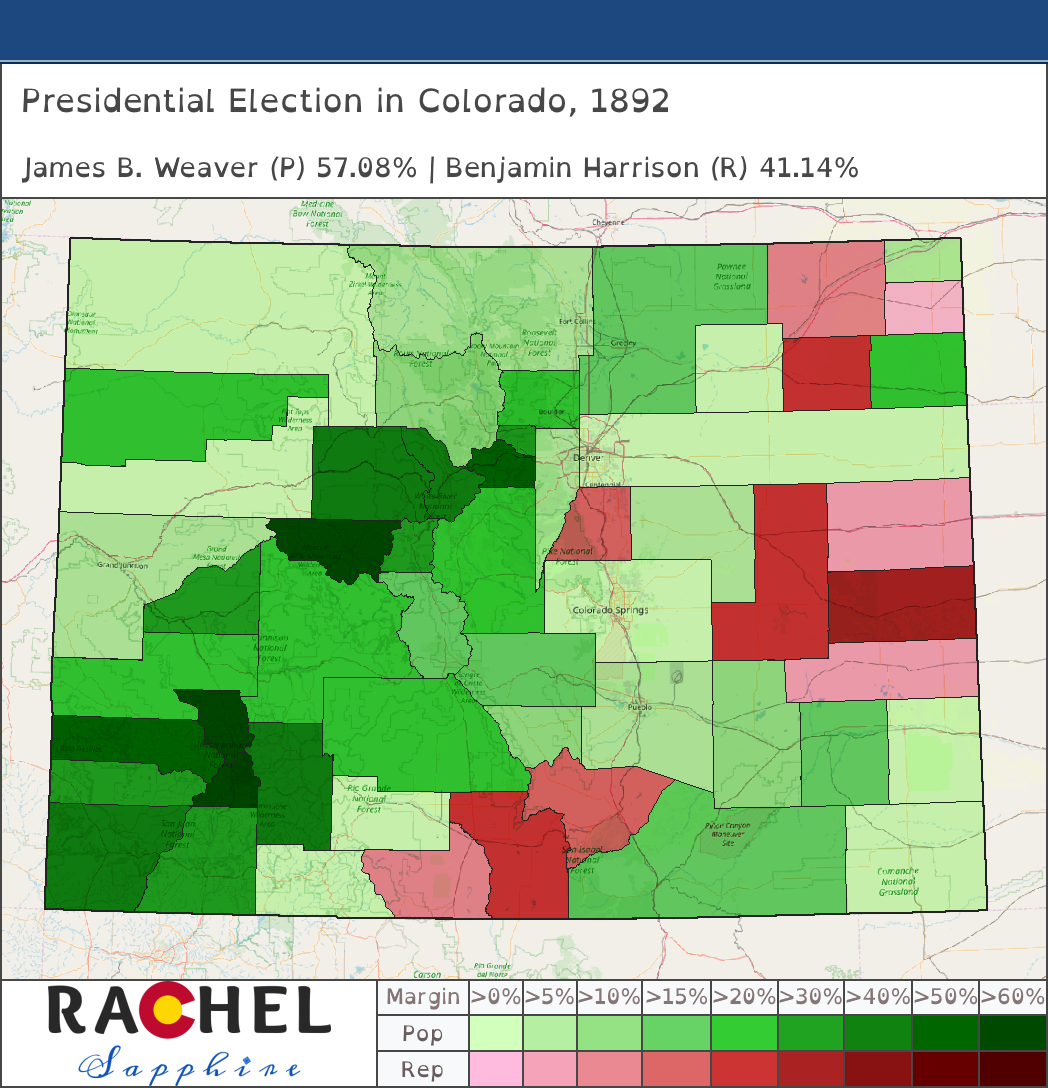 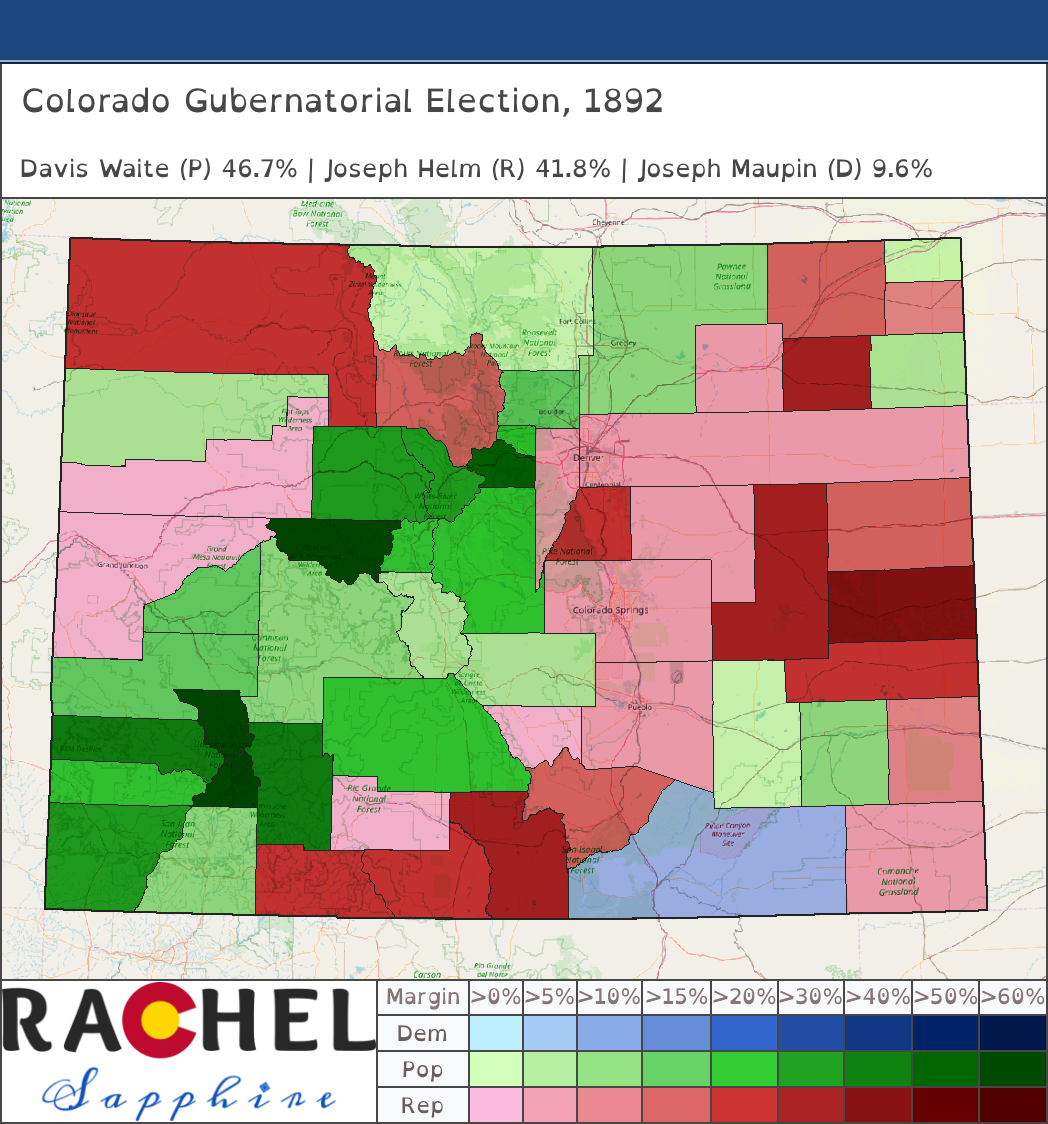 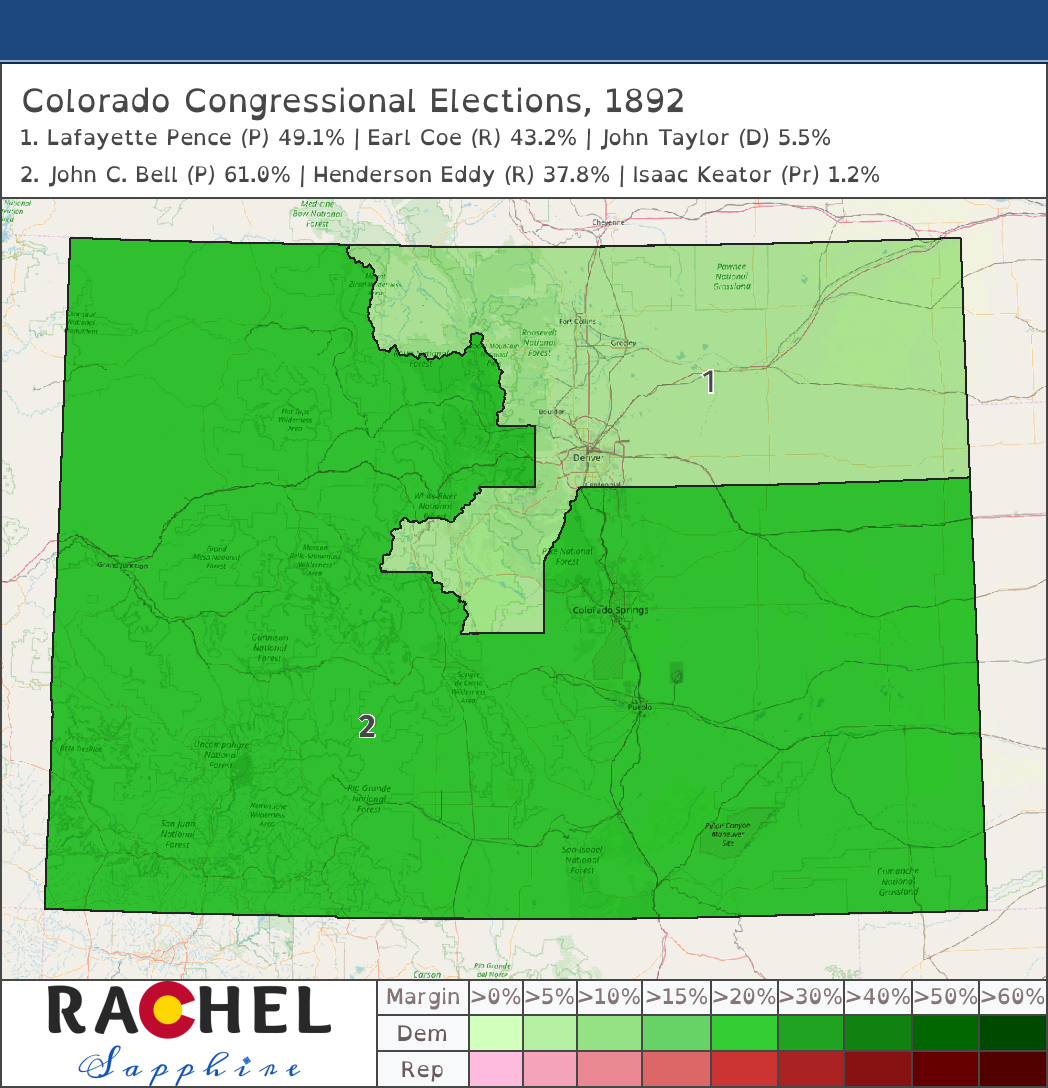 The state legislature, however, ended up more split. In the State House, the Republicans managed to keep a narrow majority against anti-Republican forces of 34-31, giving them a check on the new Governor. In the Senate, however, Populists and Democrats won enough seats to combine to hold 19 anti-Republican seats to Republicans’ 16 (as it so happens, Republicans currently hold 16 Senate seats to Democrats’ 19). 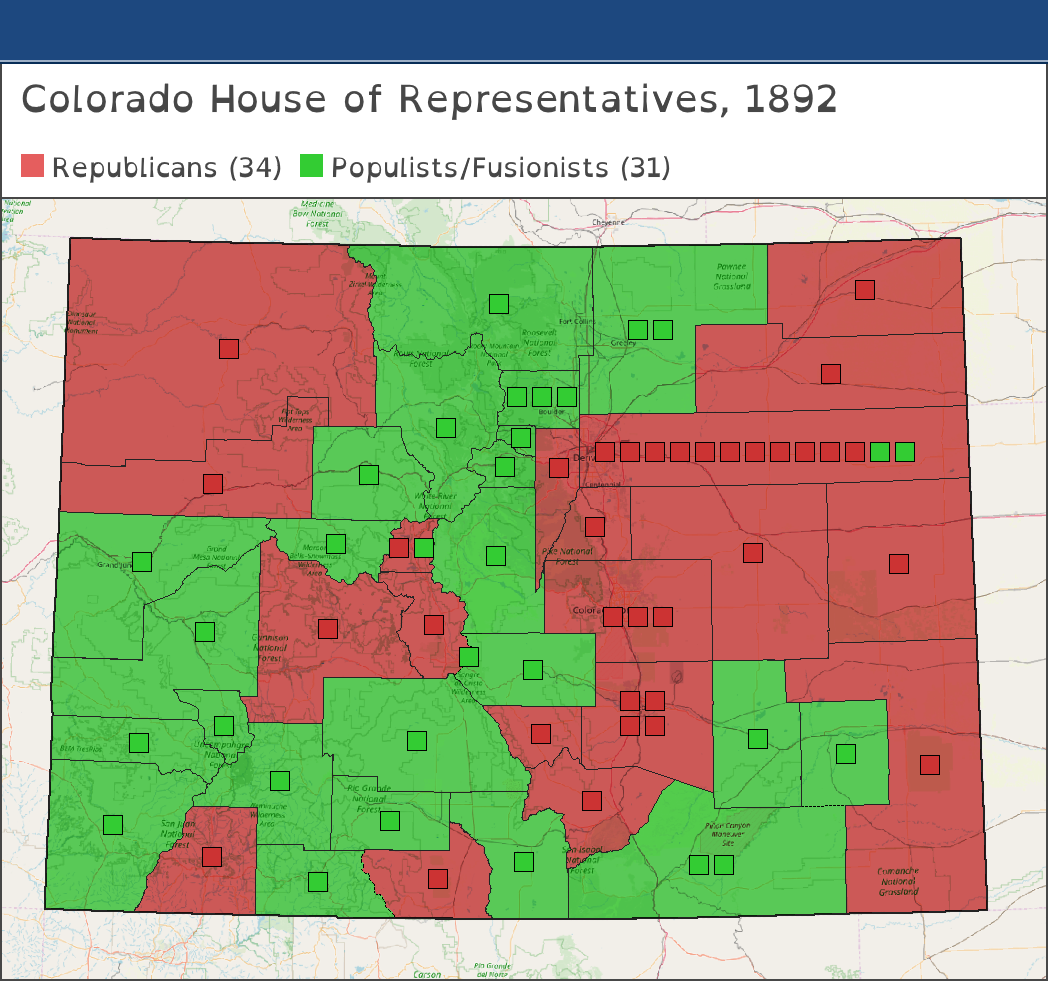 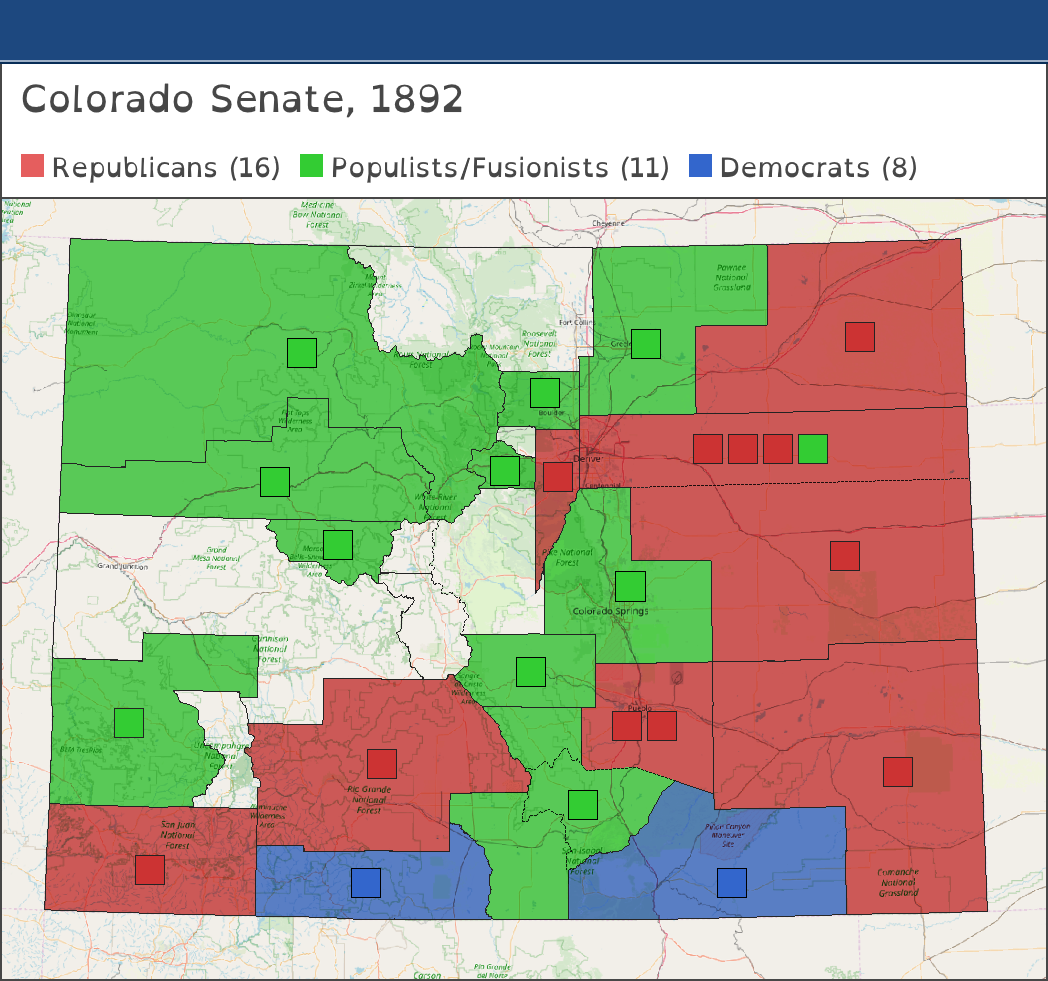 Thus, 1892 turned out to be the wave year the Populists needed in Colorado, though it would not last long for the party. The Populist Party would attach itself to the Democrats under William Jennings Bryan (who would win Colorado with over 80% of the vote) with a fusion ticket and fade from existence, though their policies and platform would make a lasting impact on both parties nationally and in the state of Colorado.